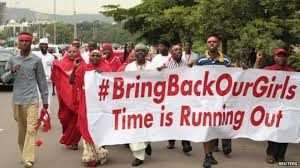 A member of the Bring Back Our Girls group, Mrs Aisha Yesufu has condemned the non-involvement of the parents of the abducted Chibok girls in the identification of a teenage girl suspected to be a suicide bomber in Cameroon.

She says the Federal government’s approach in handling the matter is unacceptable.

Speaking on Tuesday, Mrs Yesufu said that a proper identification of the girl may give a hint on the whereabouts of over 200 girls abducted two years ago.

She expressed worries over the way the federal government is responding to the matter.

“When this whole story was reported, it took 24 hours before the government responded and that was after a statement from the Bring back Our Girls movement.

“When the government responded, they indeed said that the Minister of Women Affairs was working together with the High Commissioner to Cameroon and the two parents whose names were given were set to go to Cameroon.

“I tell you as we speak right now, the parents have not been contacted by anybody from the Federal Government. Throughout yesterday they were so anxious, calling us,” she said.