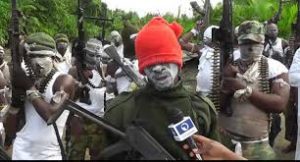 The Niger Delta Avengers on Wednesday appeared divided over whether or not to engage in a dialogue with the Federal Government over the crisis in the geopolitical zone. While a self-acclaimed spokesperson for the Avengers, Mr. Ballantyne Agiri, said in a statement on Wednesday that the NDA is ready to enter into dialogue with the Federal Government for a possible ceasefire in the region, the Avengers in a counter-statement by Mudoch Agbinibo, denied the claim.

Agiri had in a statement said that the group is determined to come out with results that will yield a lasting peace, equity, justice and harmony among all ethnic nationalities in Nigeria. But the spokesman for the group, Mudoch Agbinibo, in a tweet, dismissed the idea saying there is no iota of truth in Agiri’s claim. Agbinibo, who stressed that “they are not going into any peace or dialogue talk” also denied knowing the said Agiri. The militant group has claimed responsibility for major attacks on oil facilities in the region in recent times.