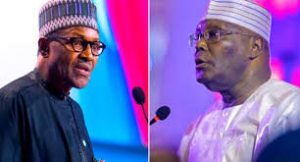 The proceedings of Presidential Petition tribunal commenced on 18th of March 2019 when the Peoples Democratic Party (PDP) and its presidential candidate, Atiku Abubakar filed the petition challenging the victory of President Muhammadu Buhari in the February 23, election.
On May 8th, the tribunal commenced inaugural sitting and it was chaired by the President of the Appeal Court, Justice Zainab Bulkachuwa. The tribunal was however delayed for another three weeks following the withdrawal of Justice Bulkachuwa as chairman of the tribunal.
On June 10, 2019, the pre-trial started and ended on July 3rd under the chairmanship of Justice Mohamed Garba who took over from justice Bulkachuwa. The main petition was heard between July 4th and August 1.
Parties in the tribunal adopted their final written addresses on August 21. When the judgment is delivered today, the tribunal would have used a total of 177 days of the 180 days stipulated by section 285 of the 4th alteration of the 1999 constitution.