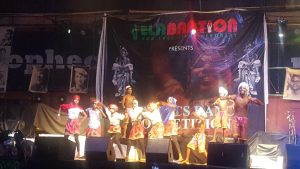 Art Castle Dance Group from Bariga in Lagos State, won the 2019 `Felabration Afrobics’ Dance Competition held at the New Afrikan Shrine, Ikeja. The winner of the Season 3 edition of the competition went away with a cash prize of two hundred and fifty thousand naira.

The ‘Kings and Queens’ group that came second received one hundred ad fifty thousand naira while Ennovate Dance House got a cash prize of seventy-five thousand naira. The 2019 edition of the competition with the theme “From Lagos with Love” featured 17 contestants.

It was a prelude to the real `Felabration’ events scheduled to hold from the fourteenth to the nineteenth of October at the New Afrikan Shrine, Ikeja, the Freedom Park in Lagos and other venues.

`Felabration’ was founded by Fela Anikulapo’s daughter, Yeni Kuti, as an annual festival to honour and celebrate the ideals that Fela lived for.

The Art Castle Dance group coach, Kingsley Okoro, said he was delighted to have participated in the competition. Okoro commended the organizers for giving the youth an opportunity to showcase their talents.