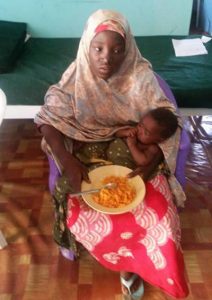 The Nigerian army has said troops on Operation Lafiya Dole have rescued one of the abducted Chibok School Girls in Baale, Borno state. Amina Ali was among the persons rescued after an encounter between members of vigilante group known as Civilian JTF and Boko Haram fighters.

The girl, who was found with a four month old baby girl, has been identified by her parents after she was taken to Chibok. Army spokesman Colonel Sani Usman in a short statement on Wednesday said she was rescued alongside a suspected Boko Haram terrorist, Mohammed Hayatu, who claimed to be her husband. Both are now with soldiers in Damboa, Borno state until further investigation is completed.