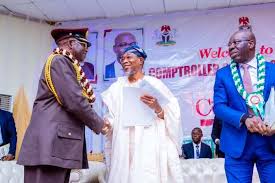 The Minister of Interior, Ogbeni Rauf Aregbosola, has said that the loyalty of Nigerians to the country is non-negotiable, hence the need for the nation’s border to be protected. Aregbesola said this at the opening ceremony of the Comptroller General of Immigration annual conference holding in Benin today.

The theme of the conference was “Migration Management in a Developing Economy: The role of NIS”. According to him, borders are political construct and because Nigerians share a political, ethnic and cultural affiliation with the neighbouring countries does not mean the country should not protect its borders.

Aregbesola commended President Muhammadu Buhari on his decision on the closing of the nation’s borders. The minister said the conference would examine the role of NIS not just in the security architecture of the country, but also as a vital tool in the economic development of the country.

He stressed that towards achieving this economic development, the NIS has been given an ultimatum of December thirty-first to deliver on an efficient, error-free, seamless visa-on-arrival process.

Earlier in his opening remarks, the Comptroller General of Immigration, Mohammad Babandede said that during the conference, the NIS intends to develop and initiate strategies, policies and programmes that would be translated into actionable plans that would positively contribute to the sustainable growth of the National Economy.