Another long strike is now imminent in the polytechnic education as lecturers across the country have threatened to embark on a strike action if the Federal Government does not urgently address the various industrial issues bedeviling the sector. 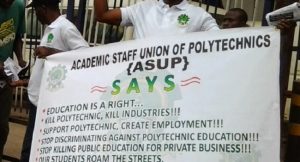 Under the aegis of Association of Staff Union of Polytechnics (ASUP), the lecturers stated that all attempts made by the union to meet government officials to explain the urgency of their demands have failed. ASUP President, Comrade Usman Yusuf Dutse, who addressed newsmen ahead of the 2016 Workers’ Day, declared that the situation leaves the union with no choice but to embark on an industrial action.