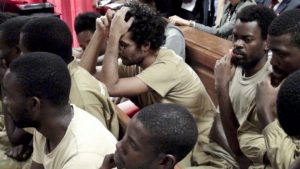 A prominent Angolan rapper has been sentenced to five-and-a-half years in prison for planning a rebellion against President Jose Eduardo dos Santos.

Luaty Beirao was sentenced by a court in the capital, Luanda, along with 16 other activists who were given jail terms of between two and eight years.

Amnesty International said they had been sentenced by a “kangaroo court”.

The 17 were arrested in June after discussing a book about non-violent resistance at their book club.

Beirao, also known by his stage name Ikonoklasta, has been an outspoken critic of the government, calling for a fairer distribution of the southern African state’s oil wealth.

He embarked on a five-week hunger strike in September in protest at his detention.

The judge convicted him of “rebellion against the president of the republic, criminal association and falsifying documents”, AFP news agency reports.

The trial had prompted global outrage, with rights groups saying it showed that Mr dos Santos’ government was becoming increasingly repressive in its attempts to remain in power.

Human Rights Watch said the verdict was “a ridiculous scandal”, while Amnesty International described the defendants on Twitter as “prisoners of conscience” who had been subjected to a “kangaroo court trial [which] violated international standards”.

Prosecutors defended the arrests, arguing that the 17 were planning an uprising among students and workers “with incalculable consequences”.

The jailed activists, who belonged to a youth movement, had previously held demonstrations demanding the resignation of Mr dos Santos, who has been in power for 36 years.

Their book club had discussed the 1993 book by Gene Sharp called From Dictatorship to Democracy: A Conceptual Framework for Liberation.

Angola is Africa’s second-largest oil producer, and has witnessed an economic boom since the end of a civil war in 2002.

However, critics of the elected government say the wealth has only benefited a small elite.