Ambode fights back, drags Lagos Assembly to court over probe 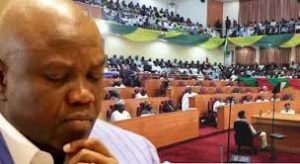 Former Lagos State Governor, Akinwunmi Ambode has dragged the Lagos State House of Assembly to court over its ongoing probe of the ex-governor for allegedly procuring eight hundred and twenty buses worth over seven billion naira without budgetary approval.

Ambode is due to appear before the House Committee probing the allegation today. The House had placed adverts in some newspapers inviting the former governor to appear before it as he was alleged to have previously failed to appear on two occasions when he was invited.

However, the former Governor has instituted a suit against the Assembly at the Lagos High Court in Ikeja to contest the constitutionality of the probe of the buses which were procured by his administration.

Consequently,  Lagos High Court in Ikeja on Tuesday ordered the Speaker of the State House of Assembly, Mudashiru Obasa to appear before it today.

Ambode said contrary to deliberate misrepresentation of facts by the lawmakers, the procurement of the 820 buses was well captured in the 2018 Appropriation Law which was duly approved by the House.