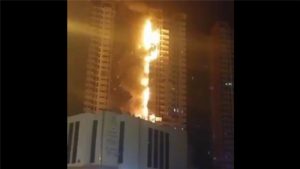 A huge fire has engulfed at least two towers of residential buildings in the United Arab Emirates city of Ajman, causing panic among residents.

The police gave no details on casualties in tweets confirming the blaze late on Monday, but said efforts were ongoing to put out the fire.

“Everyone was running around in panic. The fire initially started off on one side of the building and slowly spread out to the building beside it,” Akbar Qazi, a resident at the site said.

“Ambulances and firefighters arrived immediately and took control of the situation, however the fire is massive and might take a while for them to completely put it off.

“My flat is completed gutted,”  a resident told Dubai-based Gulf News publication. “I have lost everything including my documents and I have no place to stay.”

The fire erupted at a building in the Ajman One residential cluster of 12 towers and spread to at least another tower, according to Gulf News.

Social media users shared images of the fire showing bright yellow flames spreading up the side of the buildings.

Officials told Gulf News that the tenants were being evacuated to safety.

Traffic on roads leading to the area had come to a virtual halt, according to local media.

Monday’s fire is the latest in a series of skyscraper blazes in the Gulf country.

The huge blaze quickly shot up the 63-storey Address Hotel in the heart of the Gulf metropolis, covering nearly the entire structure and sending hundreds of people fleeing for safety.

Several people sustained injuries from the fire, and at least one person suffered a heart attack. Police have said that there were no deaths.