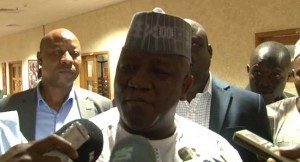 The pan-Yoruba socio-political organization, Afenifere has described as ridiculous, plans by state governors to embark on a trip to Germany for vocational training.

The Chairman of the Nigeria Governors Forum, Abdulaziz Yari of Zamfara State, at the end of the Forum’s meeting in Abuja had disclosed that the trip is to be facilitated by the German government.

The spokesman for Afenifere, Yinka Odumakin in reaction however said this shows that the state governors are not concerned about the fact that the nation’s economy is technically in recession. He urges them to shelve the jamboree.

A Nigerian Lawyer and human rights activist, Femi Falana has also described the proposed trip as frivolous and appealed to the German government to deny the governors visa concerned.

Second Republic member of the House of Representatives, Dr. Junaid Mohammed, also described the proposed trip as laughable and irresponsible. The trip is coming at a time when at least twenty-seven state governments can no longer pay workers’ salaries.