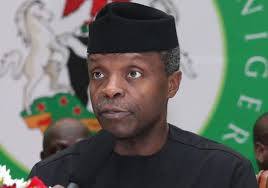 Pan-Yoruba socio-political organization, Afenifere, has faulted Vice-President Yemi Osinbajo, for his criticisms of the calls for the restructuring of Nigeria, saying Osinbajo missed the point.

Osinbajo had said on Sunday said what Nigeria needs now is diversification of the economy and not restructuring because the Federal Government controls the bulk of the resources.

Afenifere in a statement by its National Publicity Secretary, Yinka Odumakin however says the VP might have been under pressure from the Presidency to support upholders of the status quo.

Afenifere regretted that the latest comment against restructuring came from Osinbajo, who is from the South-West, which has always made a strong point for the restructuring of Nigeria.

Also, a former Governor of the old Anambra State, Dr. Chukwuemeka Ezeife, believes Osinbajo lacks a proper understanding of the problems besetting the country. The ex-governor said restructuring is what will keep the nation together in view of the prevailing economic challenges as it will reduce the cost of governance.