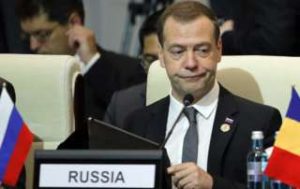 More than one hundred and seventy thousand Russians have signed an online petition to President Vladimir Putin calling for the resignation of Prime Minister Dmitry Medvedev over his recent comments on teachers’ pay.

The petition came after the premier advised a low-paid lecturer to go into business if he wanted to make money. At a youth education forum earlier this week, Medvedev was asked by a university lecturer from the impoverished Dagestan region why teachers receive only around fifteen thousand rubles, that’s two hundred and thirty dollars per month, while police are significantly better paid.

Medvedev’s comment, seen as out-of-touch and uncaring, unleashed a torrent of criticism in the press and on social media. The lower house of Russia’s parliament, is obliged to debate any petition that gets one hundred thousand signatures.

The Russian prime minister is no stranger to controversy. In May this year, he was caught on camera telling a group of pensioners “there’s no money, but hang in there.” The phrase has since gone viral. Russia’s energy-reliant economy is reeling from the fall in oil prices and Western sanctions over Moscow’s meddling in Ukraine.